For the last 10 years I have been meaning to take my kids to see how maple syrup is made.  Most of us know that maple syrup comes from maple trees, but how exactly do they get it from the tree? How does it become maple syrup? Our local metro parks is having a series of maple sugaring demonstrations called Maple Sugaring Through the Ages.

The program began with a history of maple syrup and its origin. Not much is known about how maple syrup was actually discovered but if you’d like to read the Native American legend that we were told, you can read about it at sugar maker’s times.   This story tells of the accidental discovery of the ‘sweet water’ that collected in a bowl and explains the gash in the tree in one of the lower pictures.

From Left: an “illustration” of the tomahawk gash in the tree and the wood “bowl” that would have collected the sweet water. A picture of a sap sucker that eats the maple sap.  2 jars, one with the “sweet water” and the amber jar filled with refined maple syrup and below the the jars is the drill that the kids used to drill a whole into the maple tree…which took a while!

Above there are 40 gallon milk jugs strung together to illustrate how many gallons of sap go into making ONE gallon of maple syrup! That’s a lot of sap! We tasted some Vermont maple syrup and were informed that up to 64 different flavor notes can be found in various maple syrups. It all depends on the region where the trees are grown, the soil, and the collection methods among other variables.

Our presenter took us on a small scale tour of how the modern day sugar shack evolved from the Native American’s discovery. 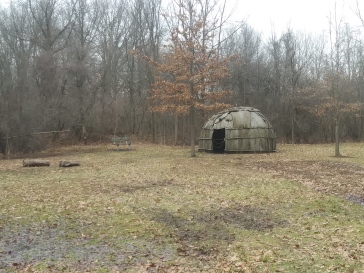 Stop one was the wigwam, which is actually at the Oakwoods metro park all year round.  We didn’t get close because it was muddy but this is where he told us the second Native American Legend about why the maple syrup season is so short. The real reason the season is so short is because the weather works the tree like a pump. When the weather is below freezing, the tree stores the sweet sap in its roots. Maple syrup season begins when the weather is above freezing during the day and below freezing at night.  This way the sap moves into the tree trunk above ground during the day and back into its roots at night; hence a pumping action into the collection pots.

Stop two was the big old pot on a fire.

We also learned how to identify a maple tree by how the branches grow.  Instead of growing staggered, they grow in a ‘Y’ formation like the picture below. Hopefully you can see what I mean.

Stop three: We moved on to the modern outdoor sugar shack. Since the sweet sap is %96 – %99 water, there is much moisture that needs to be boiled off which makes an indoor facility unfeasible. 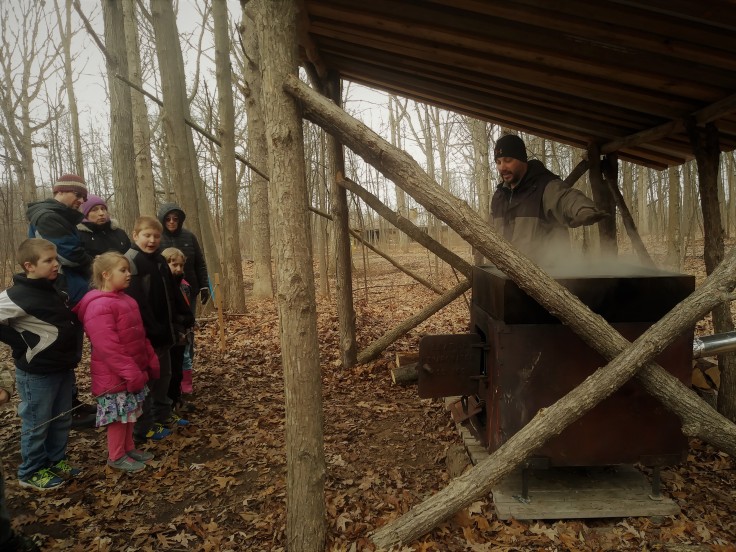 The kids each got to try their hand at drilling a maple the old fashioned way and I even got a good video of me at 36 weeks pregnant having a go! Check that video out here. 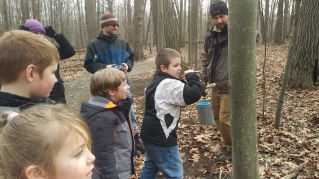 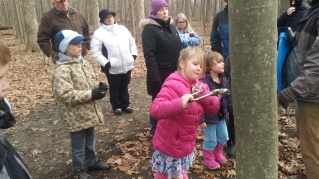 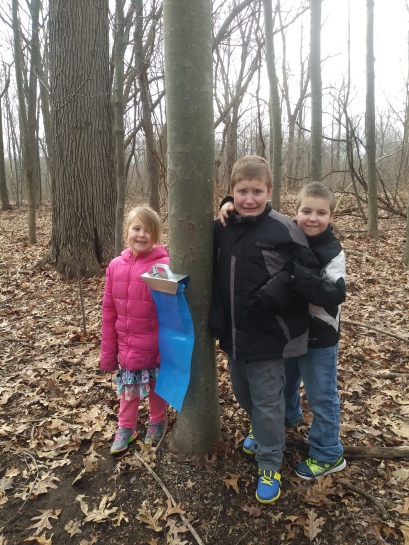 We had a great time and learned a ton of information!