Often at night, while up for the umpteenth time to use the bathroom, I will check my phone or peruse facebook. One night I saw a sponsored video where a woman was making different themed diaper tricycles for a baby shower.  The idea was too cute to pass up and I thought it would be fun to give a gift that was more than just a tiered diaper cake.  Enter a homeschooling moment.

Homeschool is more than just teaching reading, writing, and arithmetic, it really is about teaching our kids instead of just doing it.  I have been attempting more and more to make my kids the doers instead of just the assistants or watchers.  Evelyn was beyond excited to be a part of such an ambitious task as we had never seen or done anything quite like this.  In retrospect it was not very hard but time consuming to figure it out, step by step.  I did the tutorial from FaveCrafts. I watched several tutorials but this is the one we followed although we used a long sleeve onesie for the seat instead of bibs.

First we used a round cake pan to make our wheels with a toilet paper roll center to put the baby blankets through later and then secured them with a rubber band. 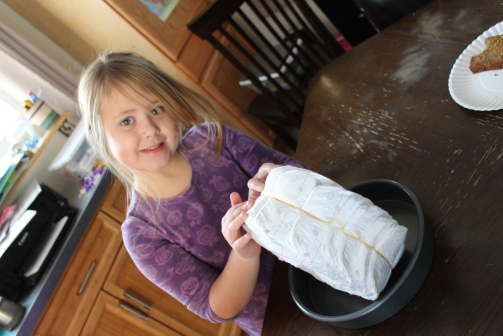 Then we had to measure the ribbon and pull it tight, and then we hot glued it to make sure it was secure. My kids have used hot glue guns before, but if yours haven’t, it’s really a good time to teach safety and also let them do the gluing.  We had some stringy glue bits but it was perfectly done.

Next I tightly rolled up the blankets and secured them with scotch tape to start assembling the tires.  WE had to tweak a few things but the seat of the bike actually was the second blanket threaded through the back tires and knotted. 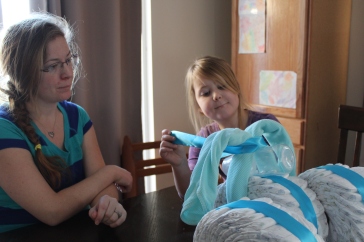 The handles were secured with the extra blue ribbon and we put socks on the handles. We are so proud of our finished project that we gave Mr. Blue Dinosaur some modeling lessons!

Maybe he should try runway? LOL!

There’s no better excuse to get involved with your child than making them apart of something beyond themselves such as giving a gift!  Evelyn was so proud!  And I’m proud we pulled it off!